Scott Mescudi had been a native Clevelander for the first twenty years of his life. Most know him better these days as KiD CuDi, but that’s only because in 2004 he moved in with his uncle, Khalil Madi (a fellow musician), to the South Bronx of New York, with nothing but $500 and a demo tape of his music. While that particular demo tape didn’t possess the trademark CuDi repertoire and flavor that most of his listeners expect when they vibe to his jams these days, the young artist honed his skills with the help of a few key individuals. Those individuals would be the plug for CuDi’s eventual deal with G.O.O.D. Music head honcho and all around god of entertainment, Kanye West, but these other individuals would also be instrumental in developing the Scott Mescudi narrative.

If you’ve heard the CuDi story before, you know that his first hit single to earn major air play was “Day N Nite,” a hypnotizing track that speaks of a young, lost, alone CuDi, lamenting that he’ll never be able to shake his imminent perils. “Day N Nite” was a song that connected with a wide demographic, and CuDi’s star, or his moon rather, began to expand to a wider audience. This groundbreaking track was produced by Brooklynite producer, and still close friend of CuDi, Dot Da Genius. Not only was “Day N Nite” a transcendent hit; however, it would also provide CuDi with a  blueprint for the first two albums of his career. CuDi parlayed his hit into what would turn out to be a fruitful partnership with Kanye West connect Patrick “Plain Pat” Reynolds. With the help of Pat and fellow producer Emile Haynie, CuDi dropped his first major mixtape A Kid Named CuDi under a G.O.O.D. Music offshoot known as Dream On. Plain Pat had been an influential cog during Kanye’s assembly of his third solo album titled Graduation, and Emile is most notably known for his production with CuDi, and his masterful production of one of my favorite albums over the course of the past five years, Lana Del Rey’s rookie contribution Born to Die. 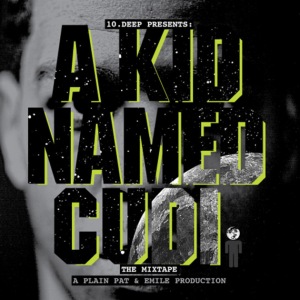 A Kid Named Cudi ended up receiving such high acclaim that the right people began to notice. CuDi continued his budding career under the guidance and friendship of Dot, Pat, and Emile, but he also made it official by signing to Kanye and G.O.O.D. Music. With a major label deal under his belt, CuDi readied himself for the all important freshman release. His star emerged, and the CuDi buzz rightfully piqued, notably with him being named to the most talented XXL Freshman List of all time. The time was right for CuDi to enter the game, especially fresh off his work with Kanye on 808s & Heartbreak. The world had a hazy idea of who this young talent was, but little did they know the world that CuDi would eventually take them to. On September 15, 2009 CuDi released his first major label album, Man on the Moon: The End of Day.

The album was a concept, documenting the ongoing power struggle between Scott Mescudi and the ever fleeting concept of happiness. CuDi fades in and out between dreams and nightmares throughout the album, and MOTM1 set a precedent for what CuDi would later confirm to be a Man on the Moon trilogy. Aiding the entire production process were Dot, Pat, and Emile, producing seven out of the fifteen tracks on the album. Dot’s “Day N Nite” was a mainstay on the album, as it fit brilliantly with what CuDi’s concept of the trilogy would be. Pat put forth the feel good record “Simple As…,” as well as CuDi’s declaration of eventual dominance, “My World.” Emile ended up with the most placements on CuDi’s first project, registering his presence with “In My Dreams,” “Soundtrack 2 My Life,” and two of my personal favorites, “Solo Dolo (Nightmare),” and “Cudi Zone.” Much of CuDi’s debut album is responsible for the genre meld that hip-hop has experienced over the course of the past half century, and much of that is thanks not only to CuDi, but to his production team for creating the sonic environment in which he tells his tales. “Soundtrack 2 My Life” became popular not only because of its melodic chorus, but because of its spaced out, unconventional take on a hip-hop beat. Another out of the box track is that of the aforementioned “Solo Dolo (Nightmare),” a loner tell-all that samples New York funk group Menahan Street Band. CuDi’s first solo release was a smash, and to this day it remains his most critically acclaimed album of his career.

With the triple-threat of Dot, Pat, and Emile behind CuDi’s production, he had a cohesive sound to his debut album, and it only ensured that with the three of them by his side, CuDi would continue to develop his story and sound with the release of his next project, Man on the Moon II: The Legend of Mr. Rager. The sequel to the inaugural MOTM trilogy turned out to be much darker in nature than the first album. While MOTM1 was considered by some circles as an almost emo hip-hop project, MOTM2 only further cemented CuDi as rap’s “lonely stoner.” With the release of CuDi’s second album, however, his listeners were afforded the opportunity to view him under a microscope in what was simultaneously the lowest and highest point of his music career. The sequel was an album fueled by addiction and a rise to stardom, a steep ledge that CuDi tiptoed on for some time. His music during this time was a direct depiction of the rockstar lifestyle that he was living, and once again production trifecta came through in the clutch. This time, as opposed to sharing his stories in a dream state, CuDi wanted to paint an authentic picture of his reality, both the good and the bad. The songs are a direct passport into CuDi’s world, and consequently his emotions. In one distinct word, MOTM2 is cinematic. It’s an ongoing narrative of CuDi’s life, and he allows his audience to sit front row for some of his most personal tracks like “Don’t Play This Song,” “These Worries,” “The Mood,” and “The End.” Much like his first major label release, CuDi’s tales were backed by a rock solid effort on the sonics side of the spectrum.

Dot, Pat, and Emile all contributed greatly to MOTM2, producing a total of thirteen out of the album’s seventeen tracks. Some of the most notable hits contributed by the triple-threat were Pat’s “Revofev,” Emile’s title track “Mr. Rager,” and Dot’s “Trapped in my Mind.” It seemed as though CuDi and his comrades were primed to finish out strongly with the finale to the trilogy sometime after the release of MOTM2, however things would not go exactly according to plan, at least for fans of the story that CuDi was developing. In what shocked fans, CuDi would go on to announce that he would be leaving Pat and Emile’s Dream On label prior to releasing his third album, and that he would be starting his own record label, Wicked Awesome Records. The move shocked some and disappointed others, and there were a number of his listeners that questioned his motives to part from the successful collaborations that he had shared with Pat and Emile. CuDi ensured his fans that he would continue to improve upon his craft, and that he simply had a different vision for himself and for his career.

As it turns out, since his split from Dream On, CuDi has still been producing music at a solid pace. He’s released three projects through Wicked Awesome. WZRD was his first release post-Dream On, a rock album he produced entirely with Dot Da Genius. Next he released his version of Dre’s The Chronic, a trippy, all the while aggressive project titled Indicud. Third, this past spring he released an EP titled Satellite Flight: The Journey to Mother Moon. Of the three, the latter provides CuDi’s listeners with the most reminiscent “feel” of his first two releases. The EP acts as the interlude between MOTM2 and MOTM3, and its packed full with galactic scores and CuDi musing about his career to that point. Overall, all three releases have showcased that CuDi has continued to expand his musical horizons, an impressive feat that not too many hip-hop-first artists can claim. All this being considered, a number of fans from the first two MOTM releases want one more taste of the old Cud. As a humongous fan of his music and his work in general, I can state that I’ve witnessed a tremendous transformation from the 2010 CuDi to the 2015 CuDi. In various interviews, podcasts, and even in communicating on social media, CuDi has shown a matured and renewed outlook on life in general, and it’s been refreshing. Coincidentally enough, it appears as though he is set to begin working on the finale to the MOTM trilogy.

The image at the very beginning of this article was posted today, January 21, 2015, on CuDi’s Twitter profile with the caption “And so it begins…@EmileHaynie.” The snapshot portrays CuDi and Haynie chilling in the studio together, and it can be concluded that the two are beginning their preliminary work on the final installment of CuDi’s epic MOTM trilogy. Not only do CuDi’s fans have the picture to salivate and wonder over, but CuDi has been dropping multiple hints that he’s getting the production trio back in the stu to chop it up, and he’s even bringing world famous Canadian DJ A-Trak along for the ride.

While I’m not exactly sure how A-Trak can hear the bat signal, it’s obvious that all of CuDi’s desired contributors for MOTM3 are on the boat. As a devout CuDi fan, it’s exciting to see him back in the studio with a number people that directly influenced his come up. It will be interesting to hear the changes between MOTM1, 2, and 3, but I think it’s a foregone conclusion that CuDi will use his newly found musical talents to take this concept record to the next level. The success that all of these guys have had over the course of the past seven years is undeniable, and while a difference in “vision” is what caused their split the first time around, there’s no telling what heights they can take MOTM3 to now that they’re all seem to have their visions aligned. It’s been rumored that MOTM3 should be dropping at some point in 2015, but whether that happens or not, one thing is for sure… The moon man’s final journey is shaping up to be the epic ending that all of us originally envisioned.