Every February when the NBA trade deadline swings around post All-Star break, the rumors start flying and relationships start shattering. It happens year after year. Dwight hates his coach, Melo wants to be in an Empire State of mind, yeah, yeah you get the story. Whether trades are born out of player discontentment or teams simply trying to improve the nucleus of their squad, they go down nonetheless. This year’s deadline was today at 3 PM, and while a total of eleven swaps went down between eighteen different teams, there were a few big winners from the day’s dealings. Let’s take a look…

Nabbing the crown jewel of this season’s deadline, Pat Riley, the godfather himself, was able to make a last minute acquisition to bring in Phoenix point guard Goran (Oh, and his brother Zoran) Dragic. Shame Riley wasn’t able to swing a deal as big as this during the summer months when he and the rest of the Heatles were attempting to convince Bron Bron to stake out in South Beach. Crowded in a talented backcourt with Eric Bledsoe and fellow trade chip Isaiah Thomas, Dragic felt underutilized in Phoenix’s offense this year, saying of the Phoenix organization “I don’t trust them anymore,” and that he felt regulated to playing in the corner and waiting for the rock as opposed to handling it.

Phoenix showed some resistance, but minutes before the 3 PM deadline they agreed to send the third-team All-NBA point guard Goran and his lil bro to the 305. In exchange, Miami shipped former foe Danny Granger, seven-footer Justin Hamilton, and a pair of 1st round picks to Phoenix. Pending Miami’s ability to convince the Yugoslavian guard to resign this offseason, Riley has outdone himself. In regards to the immediate future, Miami is much better equipped at a potential playoff run come this summer. Sure, Flash has got to be, well, Flash, and Hasasan Whiteside has got to continue to play out of his mind, but it’s evident that Miami isn’t exactly the post-King James unit people chalked them up to be. Chris Bosh is still playing at an All-Star level (21.1 PPG, 7.0 RPG, .375 3P%), and a starting five featuring Whiteside, Bosh, Luol Deng, D. Wade, and Dragic presents a respectable East playoff contender.

Portland pulled off a deal earlier this morning that improves a team that’s  got arguably one of the most elite stating lineups in the entire league. The Blazers shipped out three reserves (PF Thomas Robinson, SG Will Barton, PF Victor Claver) and a couple of future draft picks. In return Portland received Denver two guard Arron Afflalo, along with now NBA journeyman Alonzo Gee. After being reunited with the Nuggets via the Evan Fournier trade this offseason, Denver chose to ship Afflalo off once again, a move that will potentially have Portland sitting pretty come playoff time.

Adding Afflalo to an already formidable attack provides the Trailblazers with some bench reinforcement — a necessity in any seven game series. Though his three point shooting percentage is down from last season (.337% from .427%), and his player efficiency rating has decreased as well (11.77 from 16.09), Portland won’t lean nearly as much on the veteran as Denver did. Afflalo will serve as a rock steady wing coming off the bench for Portland, providing much needed breathers for dead-eye Wesley Matthews, and the long Frenchman Nicolas Batum. Picking up a solid shooter and willing defender in Arron Afflalo, Portland’s got to be confident with Dame Lillard and LaMarcus Aldridge leading Rip City into the second half of the season, and eventually the playoffs.

But seriously, what a pie-in-the-sky trade deadline gift to one of the best power forwards I ever watched as a kid. Since my earliest recollections of NBA basketball, KG has epitomized what it means to be a stretch four in the NBA. And while this deal is clearly a sign that The Big Ticket is at the end of his road, I applaud the T-Wolves for doing the right thing and making this swap happen. Shipping seven year vet and former Sixer stalwart Thad Young (14.3 ppg, 5.1 rpg, 2.8 apg) to my favorite squad up in the BKNY, the T-Wolves bring in an aging Garnett. In context with where the Wolves are headed this season though, letting Thad go for the franchise GOAT makes complete sense, right? RIGHT.

At 11-42 and seeded dead last in the Western Conference, the T-Wolves are going to be competing for Summer League championships much quicker than they’ll be competing for conference titles out in the west. That’s the essence of this deal for the T-Wolves though. Excluding Thad and Garnett from the roster, Minnesota’s average age is a little over 24 years old, a number that ranks in the top five youngest in the NBA. The thirst for Zach LaVine is coming right about… Meow. Trust me, I saw what the rookie from UCLA did in the dunk contest, but the fact remains that he’s shooting less than 30% from beyond the arc this year, and there certainly hasn’t been a large enough sample size to judge yet whether or not LaVine’s skills will develop to the elite level required of today’s top floor generals. That being said, Minnesota looks like they’ve struck gold (go figure) with offseason trade pickup Andrew Wiggins. The Kansas product’s freakish length and athleticism have transferred well to the NBA game thus far, and if he can continue to develop that outside stroke (.358% this season), Minnesota will realize that it’s better to have loved and lost than to never have loved at all.

Tossing KG into the cocktail with the young, talented bunch that Minny’s mixing up could prove to be a smart decision down the road. A consummate professional and grizzly veteran, Garnett’s been through the trenches of NBA warfare, and he’s got a ring to prove it. Returning to the place KG called home for the first twelve seasons of his career is a logical fit, and even if Garnett hangs it up in the very near future, he might try to stick around the organization for a little while. Hell, maybe The Big Ticket will even be able to act as a mentor towards former number one pick and forgotten trade piece Anthony Bennett. Who knows? Either way, I propose two things now that KG has returned to the cold state of Minnesota.

1. Nike, you guys have gotta re-retro those Nike Air KG3′s that my brother had back in middle school. 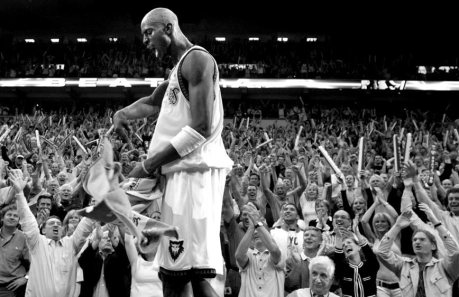 Jokes aside… Welcome home, KG. Anything is possible.

In comparison to years past, it was a relatively mild NBA trade deadline. Sure, it rained a bevy of 1s in the waining minutes before this afternoon’s buzzer, but for the most part the NBA’s elite felt fairly content with their current rosters. The Hawks have no reason to break up any juju they’ve got cookin’ with the wrist motion in the ATL, Cleveland already touched up their roster’s glaring blemishes, and in a gridlocked playoff picture, it looks like the majority of the Western Conference seems satisfied with what they’re rolling with. Today’s multitude of swaps will positively affect some teams, and negatively affect others. With the second half of the NBA season gearing up after an extended All-Star break, keep it locked at Like Poetry in M o t i o n . . . for our second half preview.

OKC picks up a big –

Brandon Knight on the move again, and MCW gets no brotherly love –

I get what Philly’s trying to do. They’re trying to  tank. As an NBA fan I hate to see teams put winning on the back burner, but logically that’s what they’re beckoned to do with the current lottery system. The Suns pick up a guy that flirted with an All-Star selection in Brandon Knight (17.8 PPG, 5.4 APG, 18.56 PER), while Milwaukee swiped up two former Syracuse point guard lottery picks in MCW and Tyler Ennis. It’ll be a circus to see the freaky length the Bucks send out there with a 6’6″ MCW at the point and The Greek Freak on the wing, and pending the former Sixers point guard can get healthy, I don’t hate this trade for Milwaukee. The Bucks are in the middle of a Larry Sanders buyout and an Eastern playoff race as we speak, so adding a big that can get up and down the floor like Plumlee was a necessity in this deal.

One thought on “Who Won Thursday’s NBA Trade Deadline?”